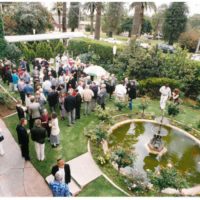 This is where it all started…  Pictured above are the founders of the Australian Alternative Varieties Wine Show; L-R Jenni Chalmers, Bruce Chalmers, Stefano de Pieri and the late Dr. Rod Bonfiglioli.  This shot was taken on the 6th November 1999 at the event which spawned the show, the Long Italian Lunch incorporating the Australian Sangiovese Awards.  This initiative brought together key stakeholders in the Australian wine scene to taste and ponder the great sangiovese grape and its emergence in Australia.

There were 28 Australian wines entered in the Sangiovese Awards, which were either straight varietal wines or sangiovese dominant blends.  They were judged on the morning of the 6th November by a panel including journalists Tim White and Max Allen,who both went on to become Chief of Judges of the AAVWS in later years, Michael Trembath and David Ridge.  These wines were critiqued in an effort to assess the progress of the grape’s production in Australia.  A winner was selected and Mark Lloyd can be seen in the photograph below being awarded the prize by nurseryman Bruce Chalmers for a Coriole Sangiovese blend. The Long Italian Lunch at the Mildura Grand Hotel that ensued was one of Stefano de Pieri’s famous degustation menus paired with brackets of Italy’s benchmark wines.  Isole e Olena Chianti, Colle Lungo Chianti, Arnaldo Caprai Sagrantino di Montefalco, Leone di Castris Donna Lisa Salice Salentino and D’Angelo Aglianico del Vulture to name a few.  The gathering also served as a forum where Dr Rod Bonfiglioli had gathered a number of speakers to talk about Italian grapes in Australia to date, and how to drive the movement into the future.  Bonfiglioli was a key instigator of the Chalmers importation of new Italian vine materials and many of the wines discussed on the day were made from varieties that were sitting in quarantine waiting for their release into Australia at the time. The room was filled with an impressive group of industry movers and shakers as well as wine enthusiasts.  Pioneer Gary Crittenden, who literally wrote the book on Italian varieties in Australia*, spoke of his challenges in wrangling the Sangiovese vine and marketing the wine to a nation in the midst of a love affair with chardonnay and shiraz.  Mark Walpole, then viticulturist for Brown Brothers, Italian grape expert and current AAVWS Committee member was hopeful but advised to proceed with caution saying “if a grower went out and planted 5 acres of nebbiolo it would probably be enough to supply the whole of Australia,” suggesting a slow and steady approach to development of the sector was best.  Phil Reedman MW, then buyer for the UK supermarket giant Tesco, said Australian wine was becoming boring and diversification into these varieties, if done intelligently and with a quality focus, could reinvigorate the industry. After an inspirational and enlightening day of superb hospitality the room was abuzz.  Bonfiglioli’s passion, de Pieri’s enthusiasm and the Chalmers’ vision and commitment to Italian varieties in Australia were fuelled by the energy in the room and the quartet went on to champion the cause into the 21st century.  This group of advocates gathered a cohort of colleagues over the years to develop what is now the Australian Alternative Varieties Wine Show Inc.  That one lunch in 1999 with 28 show entries has now grown to 3 days of judging over 600 entries, a Talk & Taste forum and various hospitality events culminating in the legendary, sell-out Awards Long Lunch which Stefano still cooks.

Perhaps the most exciting thing of all is that the AAVWS committee, plus a devoted bunch of keen entrants and participants, are still as inspired and excited by the show and what it stands for today as they were back in 1999.