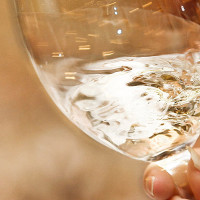 by Tim White, inaugural Chief of Judges of AAVWS and wine writer

The wine in the glass had me puzzled. It smelled bit like Viognier in that it had luminous yellow smells of apricots; yet there was something also caramelised root vegetable-like which suggested a richer style of Grüner Veltliner. In the mouth it was scones, clotted cream, and apricot jam, although was not at all sweet, and cut by considerable ‘extract’: slinky and chewy at the same time if that makes any textural sense.

So I was entirely nonplussed, albeit with considerable pleasure as—whatever it was—happened to be most agreeable alongside a wedge of chard flan topped with a flurry of Parmesan, which had just arrived from the Stefano’s Cantina kitchen.

The back label simply stated that it was ‘Hand-made in Mornington Pen.’, but this is but one part of the story. Because the vines had been imported and then lovingly cultivated by the Chalmers just along the Murray at Merbein. The grapes were then chilled and trucked to the Mornington Peninsula where, under the watchful eyes and noses of Kathleen Quealy and Kevin McCarthy at Quealy Wines, they were transformed into wine—on skins—in clay amphorae.

Ovoid concrete, ceramic and earthenware fermenters now abound in Australian wineries, but this was certainly not the case in 1999 when the Australian Alternative Varieties Wine Show (AAVWS) had its beginnings with the Sangiovese Challenge and the Italian Long Lunch which followed it. At least I can’t recall this being so twenty years ago. Nor were extended grape skin interactions with white grape varieties, either pre- or post-fermentation, a significant component in the ‘textural’ white wine dialogue: it was the grape that was meant to do the talking.

Apropos this last point: a central tenet of the AAVWS was to provide non-traditional grape varieties (to Australia) with a forum where they would be allowed to express themselves. One where they could be evaluated for what they were meant to be within a framework that did not pit them up against traditional, mainstream grape varieties such as Chardonnay, Riesling, Sauvignon blanc, Shiraz, Merlot, Cabernet sauvignon (etc.).

In many ways Stefano’s ’17 Claudia Amphora encapsulates the entire collaborative spirit of the twenty-year history of AAVWS. The wine’s very coming into being includes the cast of characters who defined what the show would become: Stefano (de Pieri), Bruce and Jenni Chalmers, and Dr. Rod Bonfiglioli, who sadly died from liver cancer a little over ten years ago. Rod’s enthusiasm for the grape variety Malvasia Istriana—and Pavana and Schioppettino—is honoured by the Chalmers  Dott. series of wines, and the results of his endeavour are now found established widely across the Australian wine landscape.

So four people were the progenitors of a wine show and series of associated events which established an alternative and original structure as to how an Australian wine show might engage with both the winegrowing and broader, wine loving community. Actually, let’s add a fifth name to the roll-call above: Helen Healy, who’s been an integral participant in the AAVWS since its conception. Because when you’re attempting something different it’s vital to have someone around to coordinate the undertaking and communicate the intent. It also helps when this someone cares about the cause.

A second wine white wine was poured at Stefano’s that evening to further challenge one’s assumptions. It was candied peel smelling, had a sniff or two of balsamic, and was deep, rich and really quite chewy. It somehow recalled from palate memory the traditional wines of Slovenia and Friuli. That little tweak of volatility served it nicely with the quail ravioli.

This time the wine was single variety: a ’16 Vermentino, again grown by Chalmers at Merbein, which had been used as seasoning wine for a new 2000 litre chestnut botte, which would later become home to Chalmers Heathcote Aglianico. Stefano had liked the look of the Vermentino and so bottled it as Tino ‘I Love You’. Who’d have thunk it back in ’99? Aussie Vermentino from a large format chestnut barrel?

Vermentino in all its styles has certainly come a long way since I tasted my first Australian grown example back in 2005 (A Murray Cod Called Bruce if anyone cares to look that one up). There were 47 entries in the 2018 show, the same as those for Fiano, and between them these two now represent the largest varietal groupings of any of the whites since pinot grigio-gris was ‘graduated’ in 2009. In that final ‘pinot-g’ year, the grape variety once described by Kathleen Quealy as ‘subversive’ in her early days pioneering the cultivar on the Mornington Peninsula at T’Gallant, provided a grand total of 94 entries. It was therefore regarded as very much in the Australian wine mainstream and had to move on.

By far the largest varietal category of last year’s wine show entries was that of the Iberian black grape Tempranillo with 74 entries in total across three classes. That’s 29 more entries than Sangiovese, the grape which inspired the show twenty years ago.  Tempranillo has certainly clicked with consumers and winegrowers alike and is providing some delicious Australian red wines: it will surely soon be a strong graduation candidate.

Not much chance of that with the black grape that presented itself in the glass of the final wine poured for me blind by Isabella. It was pale, smelled literally of roses, had brick dust, red forest berries, relatively gentle sandy tannins, and crisp acidity. Nebb—Nebbiolo—my favourite black grape variety. I gave the 2017 Tre Amici from the Malakoff Vineyard in the Pyrenees a sliver medal (metaphorically) and was happy sitting with it for the rest of the evening. It was delicious with the duck that night and was just as content alongside Murray Cod when I returned to Mildura for a brief holiday a couple of months later.

A Nebbiolo has won the Best Wine of Show—renamed the Dr. Rod Bonfiglioli Best Wine of Show in 2009—six times, more than any other cultivar. Yet it remains a puzzling wine for many wine drinkers, even those can afford it given its usually lofty price tag.

Perhaps even more puzzling was the omission of Nebbiolo from the list of wines on that very first Italian Long Lunch on the 6th November 1999. Why no Barolo or Barbaresco? Perhaps we thought that Italy’s King and Queen of reds occupied such lofty a position in the world of wine that Aussie nebb could never aspire to it? I don’t know. What I do personally recall is that it wouldn’t be until a couple of years later that I’d taste the 1997 and 1998 vintages of Pizzini’s King Valley Nebbiolo, which completely altered my notions as to what the grape variety was capable of being in Australia.

I’ve enjoyed a fair bit of Stef’s Tre Amici nebbiolo over the past year and it’s something I’ll be doing again next month. And also much looking forward to being presented with more delectable discoveries at the dining table as well as those put forward by new chief of judges Sophie Otton and her multifaceted team at this year’s Australian Alternative Varieties Wine Show.

This writer is a great fan of Anton Ego’s concluding monologue on the subject of critical evaluation in the Disney Pixar film, Ratatouille. He opines—in part—that, ‘The world is often unkind to new talent, new creations: the new needs friends.’ This is a thought similar to that with which judges have been charged since the inception of the AAVWS: that, and a healthy respect for tradition. Because in these wine and food times when so many want continual change and challenge—and nothing but the new—the old sometimes needs friends too.

Tim White will be presenting ’20 Years On’ – the opening session at this year’s Talk & Taste – The Future is Now in Mildura on Friday 8 November. Click the link for more info about the program and to buy tickets.