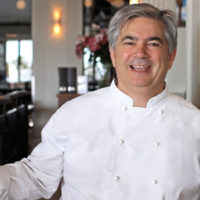 Dr Rod Bonfiglioli – the viticulturist at Chalmers’ Nursery – came to see me on a cold winter night. He said he had a project and he needed my help. I was eager to talk to him. I heard about mysterious wine things going on in the heart of Euston, a more remote type of Robinvale. I had been told that somewhere in the bowels of that location a local family was propagating Italian grape varieties.

Rod, an employee of the said family, wanted the world to know about the innovations going on there. The world, not just the locals, not Victorians or South Australians – everybody in the whole wine world.

I have always had a penchant for the impossible, utopias, projects, experiments, anything that can shake-up or be shaken, so I was eager to listen.

We ate risotto, drank something red and he revealed that he wanted to introduce new varieties, many of them, that would influence the way Australia made wine and, in turn, show the world the versatility of these other European varieties as interpreted by Australians. Mind you, you could count on your fingers the number of existing, seriously “other” varieties, so the plan was indeed very ambitious. And, for good measure, we would invite along on this journey the critics, the growers, the merchants, the wine makers, the somms, and the public, ultimately.

I had found a lot of local wines competent, pleasant and so on but not really suitable to my Italian inspired food. Now, do not get me wrong. The world does not have to change to suit my food! But if we could do away with wood chips, too much tartaric, terribly monotonous added tannins, bret, predictable flavors, too much alcohol, etc, I would be interested.

Those were the days when people demanded VB with their food and REFUSED (“what’s this shit?”) Peroni (a little more suitable to Italian flavors, you would think) . Now, they can ‘t get enough of it…

Anyway, the rest is history and you have heard it many times before.

The point of this story is that if there existed a museum of innocence, the AAVWS would have to be represented. When an idea comes from a genuine source it can indeed inspire a lot of people and if the source remains uncontaminated it will continue to produce wonderful things, like freshness, renewal and progress.

Of course, without the investors taking risks, without skill, professionalism, knowledge, marketing, effort, and optimism of the will, no matter how innocent, the idea will not come to fruition. The first shows Chair, Tim White, for instance, imposed almost obsessive standards that ensured quality results from the very start. Discipline sustains belief.

The success of the AAVWS even after 15 years is that it has retained the freshness, the honesty and the optimism of the neophyte.

Whilst commercial considerations will have to play their part, the transcendent desire by all involved to create something special is the key driver. And that is a kind of art.